Up to the start of the Second World War, the French Navy was building a gun battery they called Castel Verdon, located on a hillside 10 km. west of their important naval base of Cherbourg.
The battery was to be equipped with 2 turrets, each fitted with twin 340 mm. guns. The two gun pits, almost 20 meter deep, were virtually complete when the Kriegsmarine (German Navy) took over the construction site in the summer of 1940.

In 1942, the German navy had plans to upgrade the main armament on their battleship Gneisenau but whilst the ship was in the shipyard in Kiel, it was heavy damaged, during a British air raid and the plan was abandoned.  The existing main armament, which comprised 283 mm. triple guns mounted in turrets, was instead moved to reinforce the Atlantic wall in Gun Battery Oerland and Gun Battery Fjell, both in Norway.

The new main armament for Gneisenau comprised 380 mm. guns twin mounted in turrets, and two of these turrets were already complete. In autumn 1943, it was decided that these two turrets should be installed at Castel Verdon and at the same time, the name was changed to Gun Battery Landemer. The almost-complete French gun pits did not match the German gun turrets and so casting of new mountings was begun. This new work was to the east of the French gun wells, but already by the turn of the year, the plan had changed and construction stopped. The 380 mm. was sent to Denmark to be main armament in Gun Battery Vogelnest. Instead, the Germans began construction of bunkers (M272) for 4 x 150 mm. guns. These guns were manufactured by Skoda and had a range of 23 km. The name was retained, but the location was moved in front of the French gun pits.
After the Allied landings in Normandy in June 1944 (D-Day) the port of Cherbourg was an important goal. The Allied forces needed massive supplies and there was an acute shortage of large ports throughout the area; the American Mulberry Harbour had been destroyed in a storm and the British Mulberry was incapable of handling the massive volume of stores needed. The guns in Landemer Battery engaged Allied naval forces (Combined Task Force 129) on 25th June.  At the same time, the U.S. ground troops moved towards Cherbourg from the south-east. The battle for Cherbourg was extremely hard and only ended on 1 July 1944, when the last German troops surrendered, but not before they had demolished much of the crucial port installations and infrastructure. With great effort, the Allies reopened the port to shipping in late August.
The area around the gun battery still belong to the French Navy. 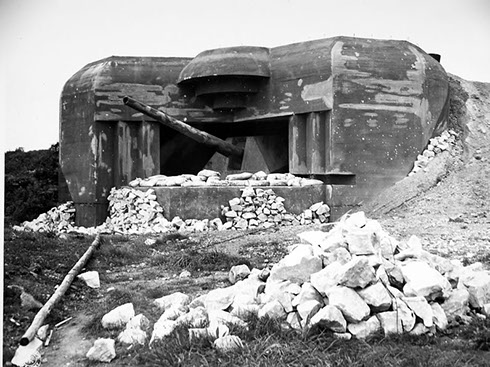 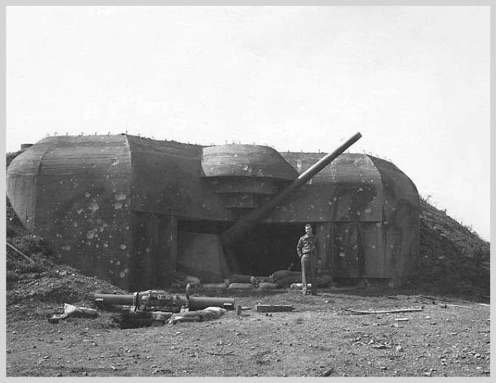