In autumn 1943, the Germans began to build a launch base for their V-1 rocket in the woods near the town Ardouval, 20 km. south of Dieppe.

There were countless such simple sites scattered across northern France. The pilotless planes were supplied by rail from production factories in Germany and were prepared and fired from a launch pad at each site.

Once launched, the V1 flying bomb could not be controlled so the launch ramp had to be pointing directly toward the target; the ramp at Ardouval was pointing straight to  London, 200 km. to the northwest. The distance from the ramp to the target was also of great importance since the V1 crashed to the ground either when it ran out of fuel or when a special control valve turned off  the fuel. Such a system was simple though not very accurate.

The basic, lightweight design and small size of the base was a deliberate choice by the Germans. The base was quick to build and used few scarce building materials; as well as being designed to be concealed from Allied bombers.  Nevertheless, as with most other V1 sites, its location was known to the Allies and it was subjected to numerous bomb attacks between December 1943 until the Germans left there in June 1944.

Today there is an open exhibition on the ground containing ruins of the various buildings and bunkers, and a copy of a V1 flying bomb placed on a launch pad. 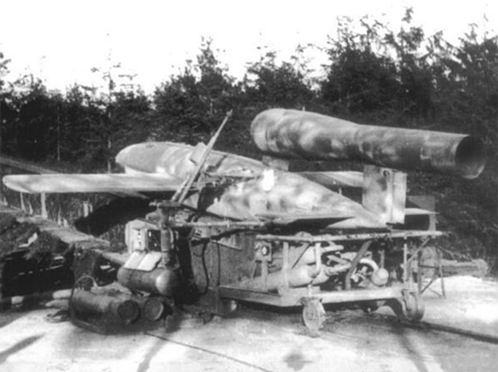 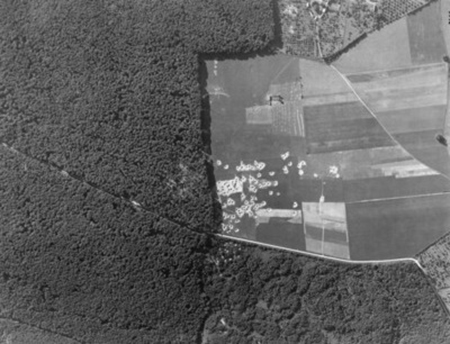 “  My dad was a Bomb-aimer in the 428 Ghost Squadron of the Royal Canadian Air Force's 6th Bomber Group. In his log book, for the night of 26 June 1944, I have a picture of a large explosion with a bit of a V1 launch ramp protruding. It reads "Direct Hit - Flying Bomb site - Ardouval (France). Apparently they dropped 18 x 500 pound M.C. bombs from 12, 400 feet above. This was my father, Pilot Officer Frank C Hannan's 31st Operation and it was his second on the new Lancaster with -presumably- an improved bomb site. I guess the combination of experience and new gear helped with this successful raid, that no doubt saved lives of Londoners!   ”

“ The Ardouval site is an historic site, being the only V1 site in France opened to the public. Originally constructed in a beech wood, the timber was rendered valueless by the bombin of the site in july and August 1944. In 1954 the site was replanted with conifers under the war damages agreement. Sadly the nearby hamlet of Ardouval was a victim of allied bombing raids, causing damage to both buildings and livestock.

The site is excellently maintained and well signposted so that visitors are left in no doubt as to how the site was operated.  ”