In the winter of 1941, the Germans began construction of a bunker in Kiel for protection and minor repair work on U-boats. This bunker was code-named Killian, and by autumn of 1943, it was ready for use.

The bunker was hit several times during the numerous Allied air raids on Kiel, but suffered no significant damage. On the night of 9/10 April, the RAF conducted a major bombing raid on Kiel. The bunker took several hits from the 591 bombers involved. One bomb blew open the large steel entrance door, and caused the U-4708 to sink inside the bunker. Five people were killed in the raid. Despite several attempts, U-4708 was never recovered.

After the war, the bunker was demolished in stages. The last visible remnants disappeared by 2002. Today, the remnants of the bunker and its contents form part of the newly built port terminal.

In spring of 1943, the Germans began construction of a U-boat bunker at the Deutsche Werke, just south of the Kilian bunker, code named Konrad. Construction was severely delayed due to the many Allied bombing raids on the Kiel area. The bunker was finished by autumn 1944 and immediately put to use in the construction of modules for the new Typee XXI U-Boat. In spring 1945, construction switched over to the Seehund midget U-Boat. The bunker was demolished after the war, and no traces remain today.

Kiel was a major town and port for the Kriegsmarine and the many activities at the port drew considerable attention from Allied bombers. To protect the shipyard workers, sailors, and of course the civilian inhabitants, many bunkers were built throughout the area. Most of these still exist today, scattered about the town. 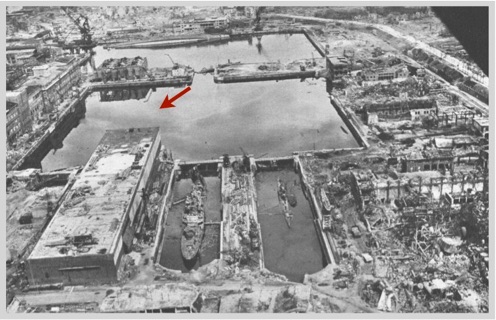 “  In the lower photograph you can see the capsized hull of the pocket battleship Admiral Scheer. it is in the furthest away dock behind the red arrow. After the war it was partially dismantled and the remains covered over to make a new quay. ”

“  The Admiral Hipper is in the flooded dry dock on the left. Today from the air, all of this has been filled in with sand and gravel. ”