In 1943, in the town of Ligescourt, in northern France, the Germans built a launching base for their V-1 rockets. The base was one of many that were built around in north of France. The base was to receive the rockets from production factories and after preparation, to fire them at England.

The V1 flying bomb could not be controlled, therefore the launch pad had to be pointing directly at the target. The ramp in Ligescourt was pointed directly at London, 240 km. away.

The distance from the ramp to the target was also of great importance, since the V1 only struck the ground when it ran out of fuel or a special device turned off the fuel supply. The system was simple, but not very accurate.

The simple and light construction and the small size of the base itself, was a deliberate choice by the Germans. The base was built quickly and cheaply and attracted little attention from Allied bombers. When observed from the air, or in air surveillance images, the storage bunker which was curved at one end and were called “ski” sites, by the Allies, these "ski" sites were heavily bombed, so the Germans  used mobile launch vehicles instead. ‘Ski’ sites like this example, were never put into use, but were retained, only to attract the Allied bombers.

The base was bombed in December 1943 and it is still possible to see the bomb craters in the woods.

The threat of V1 flying bombs ended only in late 1944 when the area was conquered by the Canadian and British troops. 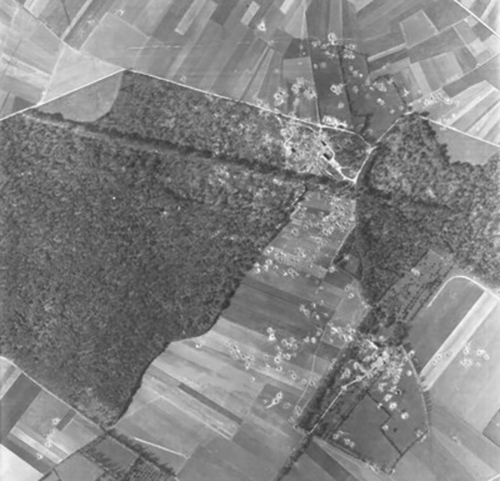