In the area around Calais in northern France, where the distance to England was the smallest, the Germans erected up a series of railway gun batteries. The special type of guns used was characterized by a very long barrel and  consequently a very long range. The guns had all been produced in the 30’s by Gustav Krupp.

One of the more famous types was a 210 mm. gun called K 12 (E) which could fire its shells for a distance of 115 km. – well into Kent (England). Two of these guns were positioned at Hydrequent, south of Calais.  The barrel only had a life of 50 rounds before it had to be resleeved.

The most common gun was a 280 mm. gun called K 5 (E). It had an effective range of 50 km. but did not have any limit on the number of shots before the barrel had to be replaced!  The long barrel gave the guns a very high precision.

To protect these vulnerable guns that had neither armour nor turrets, the Germans built three storage bunkers, popularly known as Dom bunkers, in the area around Calais. These were simply long tubes of reinforced concrete with armored doors at the ends in which the guns could be kept until they had to fire.

Each gun battery generally had two identical guns, one of which was in reserve. When the guns were required to fire, they were moved out of the bunker.  As the guns could not traverse within their mounts on railway wagons, by using curved track the direction of fire was set. An example of a railway K 5 is on public display in the Batterie Todt Museum at Audinghem, near Cap Griz Nez. 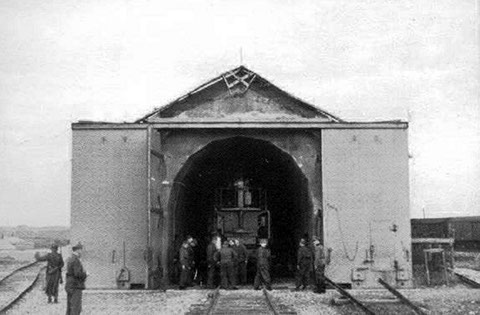 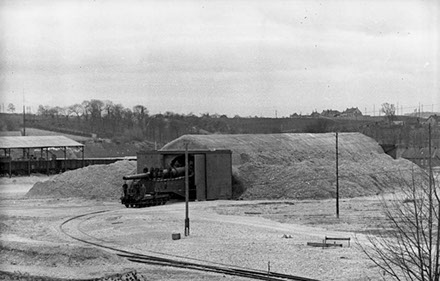 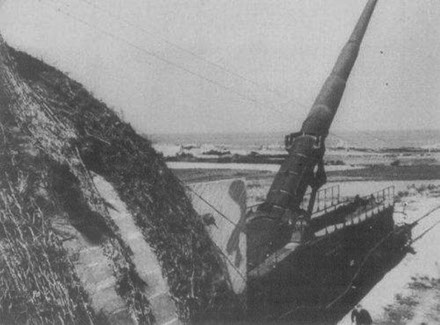