Knickebein (”Crooked Leg”) was the first system developed by the Germans for precision bomb attacks in England at night or in poor visibility.

Radio beams of about 30 MHz were aimed directly at the target and the bombers could hear from the radio in their cockpits when they were on the right track. This was achieved by having the two beams overlap in the centre. One beam would send a series of dots and the other a series of dashes. Provided the pilot could hear a steady note, he was exactly on course but if he drifted to one side or the other, he would hear dots or dashes, warning him to adjust his course to achieve a steady note again.

A further radio beam crossed the first ones, giving the navigator the distance to the target. At 250 km range, a target could be hit with an accuracy of +/- 1,500 metres. (By comparison, at that time and using ”dead reckoning” navigation, only 20% of British bombers were within 5 miles of their target.)

On the evening of 21 June 1940, a British aircraft was flying over East Anglia looking for radio beams and detected one aimed directly at the important Rolls-Royce aero engine factory in Derby. The air raid on that factory confirmed what British Intellence had feared and, as a response, British radio stations began to jam the German signals to disrupt the German raids. In turn, the German counter-measures meant, for example, that the cross-beam signal was first activated when the bombers were close to the target or that one or more wrong targets were identified.

In parallel, the Germans were embarking on a more precise system, which was also more difficult to jam, called X-Gerät. Although more complex to set up, it was much easier for the bomber crews. Five radio beams were used: two to set the course and three intersecting beams which would automatically drop the bombs on the exact target.

The remains of the Knickebein radio installations are very easily recognizable today because of the circular ring on which the antennae could be installed.

In total, 13 stations were built throughout Europe, and only the one in Sicily never became operational: 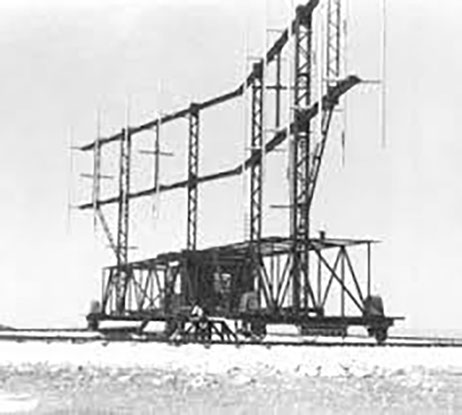