In 1943, on a hill near the town of Querqueville, the Germans started to build a gun battery. This battery was intended to protect the western flank of the important port city of Cherbourg, which lay just five kilometres to the east.

The guns were four 170 mm. guns dating from 1940, with a range of 27 km.  Each gun was mounted in a concrete bunker (M272), with additional bunkers for point defense and crew accommodation.

After the Allied landings in Normandy on 6th June 1944 (D-day) and their rapid break-out from the beach-head, the whole of the Cotentin Peninsula was isolated on 18 June. On 25 June, the Allies placed naval vessels around Cherbourg and several of the German gun batteries opened fire. The guns of Battery York achieved several hits, including on the American battleship "USS Texas".

On 26th June, the battery was attacked from the rear by American infantry and was put out action, playing no further part in the battle for Cherbourg, which raged for a week and finally ended with  the surrender of all German forces on 1 July 1944. Just before surrendering, the Germans demolished most of the port installations in Cherbourg.  Despite strenuous efforts by Allied engineers, the port was not capable of receiving larger ships before the end of August. 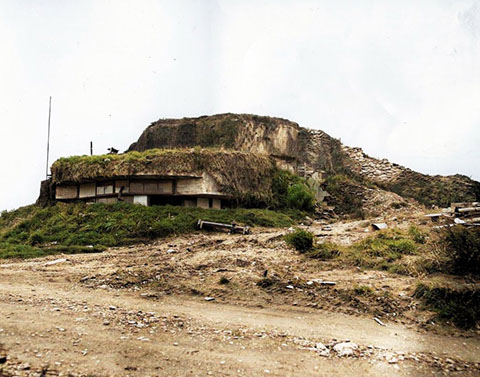