During July 1943, the German Luftwaffe began construction of what was planned to be a base to launch their newest weapon, the V-2 rocket, in the western part of Cherbourg. However, this plan was abandoned in late 1943 and instead, in January 1944, they started construction of the largest launch base for the smaller V-1 Flying Bomb. The location chosen was developed by the French navy in the 1930s as a huge fuel depot for their major base at Cherbourg.

The Germans gave the plant the code named Wasserwerk II and it was one of a total of 4 large bases, all to be built in northern France. These were to be used for the  preparation and launch of V-1 flying bombs against England. None of the four bases was completed before the Allied advance after the Normandy landings and bombing stopped the construction work.

The installation in Brécourt was scheduled to be completed in summer 1944 and to be large enough to store 300 V1's. The launch pad was pointing towards Bristol and Cardiff and was surrounded by a protective bunker of reinforced concrete.  This huge bunker was nearly 80 meter long and was planned to be 500 cm. thick. Storage, preparation and shelters for the crew were to be located in the old French naval depot that was blown out of the solid rock. The plant was 20 feet below ground and gave good protection against the Allied bombers. The Allies knew about the building, but did not consider it as a threat and therefore it was not bombed.
No V1 flying bombs were ever launched from the Brécourt facility and on 17 June 1944 the area was conquered by American troops. Later that year the place received a prominent visit by British Prime Minister, Winston Churchill.

The area still belong to the French navy, but can be visited one weekend a year under the "Heritage Day" (the third weekend in September). 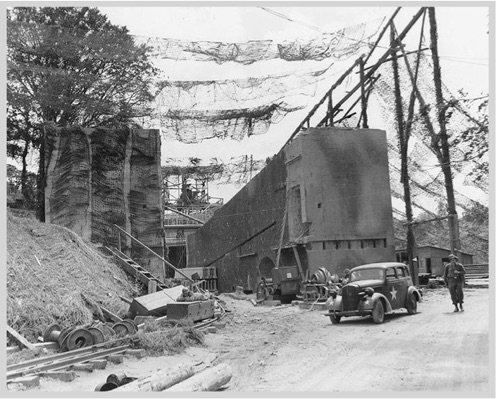 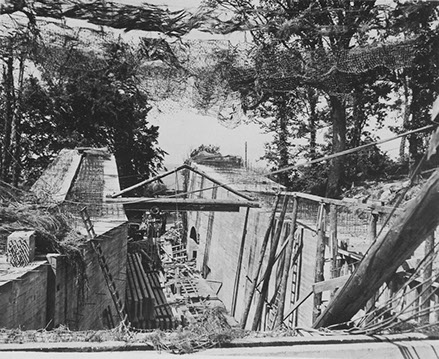