Work began in November 1943, in the Owl Mountains of the Sudetenland, on a project of unprecedented scope. Even today it is not known for certain what exactly was going to be built, or what the actual size was going to be. Most historians believe that this was intended to be a new and final headquarters for Adolf Hitler. From the available information, this underground city was going to cover up to 10 square kilometers, and would include facilities for the Army, Luftwaffe and SS High Commands.

The complex was scheduled to be completed in August 1945. Forced labor was obtained from Auschwitz. A local camp was established to house these prisoners. It was designated Arbeitslager Riese (AL Riese) and was part of the Gross-Rosen concentration camp. AL Riese consisted of thirteen subcamps, eventually holding at least 13.000 workers.

During 1944, demolition, drilling, and tunneling continued, as did the construction of six bridges. More concrete was poured here than anywhere else in Germany that year. The total spent on this project was 150 million Reichsmarks.

It was planned to use nearby ancient castle of Fürstenstein as a residence for Hitler. Shortly before the Soviets reached the site from the east,  it was closed down.

Indications today are that approximately 50% of the underground facilities have been explored. It is possible to visit this facility via the nearby towns of Rzeczka, Włodarz and  Osówka. 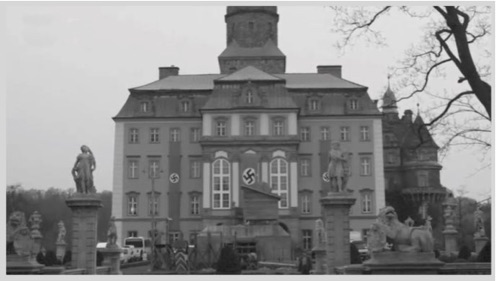