With the conquest of Holland, Belgium and France in the summer of 1940, the Germans had been given a golden opportunity to move their naval bases closer to Britain.

Bases for their fast attack craft (Schnellboot – E boats in English, E for enemy) were established in the ports of Cherbourg, Boulogne, Ostend, IJmuiden, Le Havre, Dunkerque, Den Helder, L'Aber Wrac'h, Lézardrieux and Rotterdam. With the new locations, the bases were more exposed to air raids by the Royal Air Force and it was quickly decided to build bunkers for the various facilities.  By the summer of 1941, the first bunkers were ready at Ostend and Boulogne and shortly after in IJmuiden, Cherbourg, Le Havre and Rotterdam.

The bunker in Boulogne was designed with space for 12 S-boats and behind that bunker was a further an ammunition bunker for the storage of torpedoes. This torpedo bunker had access ramps on both sides to the railway and a small track connected the two bunkers. The roofs had a thickness of 200 cm. which, at the beginning of the war, was sufficient to protect the boats against most British bombs. However, as the war progressed, the bombs got larger and more efficient. On June 8th 1944 the Royal Air Force dropped their new "Tallboy" (12,000 lb, 5,500 kg) for the first time and just a week later, the bunker in Boulogne was attacked by the same bomb. Nearly 300 bomber participated in that attack and 10 Tallboys were dropped.

This attack rendered the harbour unusable and the Germans quickly moved the undamaged boats to the base in IJmuiden.

Today, only the torpedo bunker remains in Boulogne and it is still possible to see traces of the bomb attack on the bunker sides. 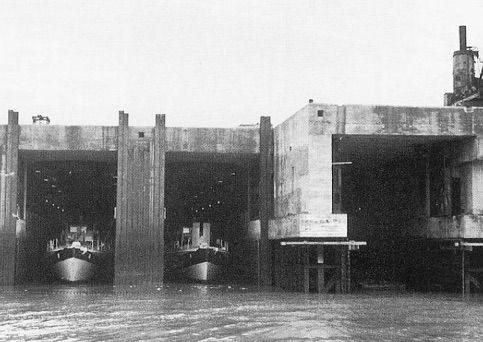 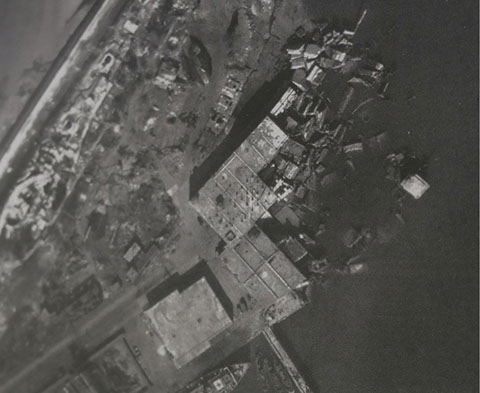