In the summer of 1940, the Germans started to fortify the island  of Husöya, 50 km. northwest of Trondheim. These fortifications were continuously expanded and in the spring of 1941, a large radar station was erected, together with a gun battery with three 283 mm. guns.  The guns came from Battery Goeben at Swinemünde and had a range of 35 km. They were set in open concrete posts and thus a  field of fire around 360 degrees. To direct the fire from the three guns, a large command bunker was constructed, with a rangefinder mounted in an armored cupola on the roof. Organisation Todt had overall responsibility for the construction, using forced labour by mainly Russian prisoners of war. It is estimated that including the prisoners of war and the German soldiers, there were about 2.000 inhabitants on this small island.

After the war, the Norwegian coastal artillery used the area, but during a test firing in the autumn of 1945, an accident occurred, killing 8 soldiers and, with it, the plans to preserve the gun battery operationally. Because the battery is located in a remote area, it is well preserved, with several remaining relics, including the remnants of some old radar equipment. 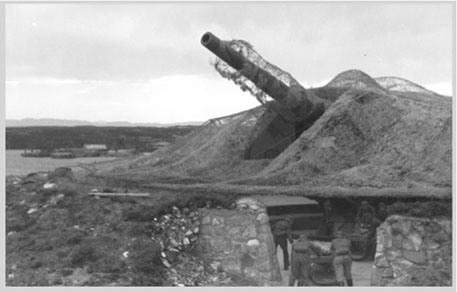