During the excavation of a well in 1848 in the city Hinterbrühl, Austria a large amount of limestone was encountered. It was decided that instead of a well, a mine would be constructed on the spot. Tunnels were quickly dug and blasted into the ground.

In 1912 a water pocket was opened during a blast operation, causing 20.000 cubic meters of water to flow into the mine. This halted the mining for several years. In 1932 the mine opened as a tourist attraction with boat trips on what was now Europe's largest underground lake.

In Autumn 1943 a sub-camp of the Mauthausen concentration camp had been built at the Hinterbrühl mine. The camp would house 1.800 forced laborers who were building an underground factory in the mine, with the subsequent work to be the production of parts for airplanes. The factory was codenamed Languste, or crayfish. After all the water was pumped out of the old mine, a new floor was laid in what was now to become the production hall. Work started quickly and the 1.800 forced laborers and 300 skilled workers started turning out airframes for Heinkel He 162. A total of 198 of these airframe were produced before the factory was closed in the spring of 1945. During the evacuation, 51 forced laborers were executed and the rest sent on a death march back to Mauthausen. Almost no one survived. The Germans had plan to blow up the entire underground facility, but an Austrian soldier in the German army managed to prevent it and only a few of the charges detonated. However, the pumps that kept water from refilling the mine were destroyed during the explosion and the mine again filled with water. After the war a major clean-up began and in the spring of 1949 the underground lake was again opened to the public with boat trips. 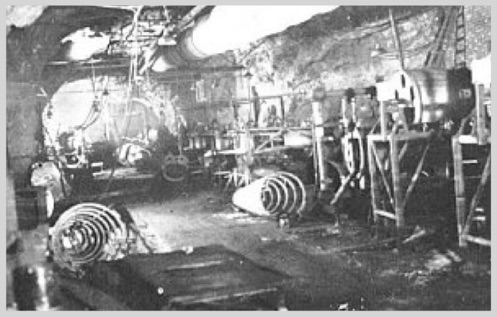