In the Austrian town of Sankt Georgen an der Gusen, the Germans began construction, in Spring, 1944, of what would later become one of the most notorious concentration camp of all, KL Gusen II.

The Germans had plans to build one of their largest underground factories in the city. Over 10.000 slave laborers began to drill and dig in the ground to build a factory complex covering over fifty thousand square meters. This task was completed in just 13 months. Even before this construction was complete, 6.500 workers began work on the plant’s actual production. This consisted of fabrication of fuselages, then adding components made elsewhere to build Germany’s modern fighter jet, the Me 262.

During that summer, the first fighters left the factory, and by war’s end the factory had produced and assembled nearly 1.000 of these fighter jets.

The slave workers were pushed to the limit and it is estimated that between 10.000 and 20.000 died during this same time period.

All the plants contributing to this operation were arranged in newly dug mines, and were given code names based on geological indications. For example, the plant at Sankt Georgen an der Gusen was codenamed Bergkristall, or rock crystal.

Shortly before the liberation in May 1945, the Germans had planned to blow up the entire plant. This is done to prevent the enemy from benefiting from the production techniques and to erase all traces of the use of slave workers. Luckily it didn’t work out and after the Americans had examined the area and took what they could use, the Soviet experts took over the area in August 1945. In 1947, they detonated several of the most important tunnels and entrances, and so closed the plant down. 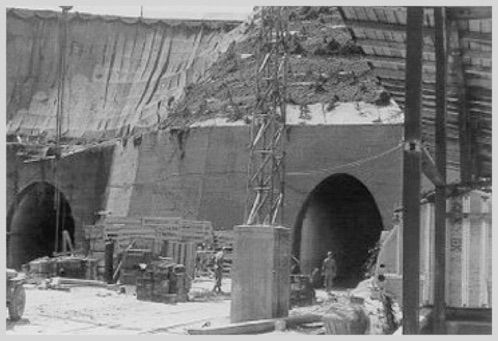 © Picture by Rudolf A. Haunschmied

© Picture by Rudolf A. Haunschmied