In 1943, near the city of Vacqueriette, the Germans built a launch site for their V-1 flying bombs, this being just one of the many such sites in northern France.  The plan was that the base received machines from the factories, assembled and prepared them and then fired them against England.

The V1 flying bomb could not be directed in flight so the launch ramp had to be pointing directly at the target – at Vacqueriette it points at London, 240 km. away.

The distance from the ramp to the target was of great importance, since the V1 would fly in a straight line until either it ran out of fuel or a special valve cut off the fuel supply to its pulse-jet engine.  The system was simple, but not very accurate.

The simple and light construction and small size of the base itself was a deliberate choice by the Germans, being quick and not costly to build.  The storage bunker had a curved shape at one end to reduce blast damage if bombs fell near the entrance doors.  Allied photo-reconnaissance aircraft soon detected these sites but initially their purpose was not known and, because of the curved shape, they were labelled “ski sites”.   As soon as launches of V1s began, all the ski sites were heavily bombed so were never actually used by the Germans who instead turned to highly mobile and almost invisible launch sites; the fixed sites were left intact to draw off the Allied attacks.

The threat of V1 flying bombs did not end until late 1944 when the launch area was captured Canadian and British troops. 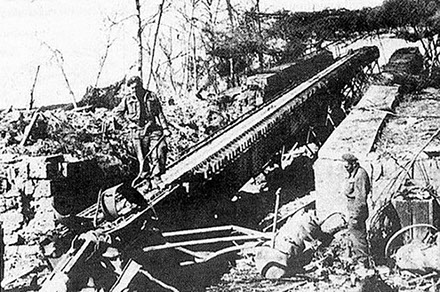