Southeast of Rügenwaldermünde, the German army (Wehrmacht) established a heavy artillery firing range in 1935. Administration buildings, workshops, warehouses and a small barracks were also erected in the area.
Test shots were fired over an enclosed area of the Baltic Sea or, for smaller ordnance, directly into a firing box; these, when filled with earth, could trap the shells for subsequent ballistic investigations.
The area was visited several times by contemporary celebrities and in the picture, Adolf Htiler, Albert Speer and armaments manufacturer Alfried Krupp inspect the large 800 mm. railway gun "Schwerer Gustav" before a test shot in March 1943.
Hitler had previously visited Rügenwalde with Benito Mussolini and also Hermann Göring, Erich Raeder, Wilhelm Keitel and Gerd von Rundstedt were frequent guests.
Towards the end of the war, the main and most secret installations were destroyed and after the war, the land was used first by the Soviet army and later the Polish. The military airfield in the area is still operational. 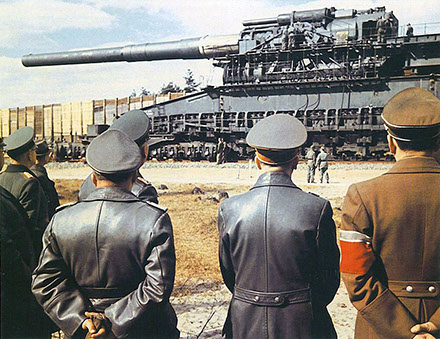