One of Germany's most important radar stations in Normandy was located at the town of Douvres-le-Delivrande. It was started in early 1942 and was continuously expanded until the summer of 1944.

Five radar were set up, including a 65 meter high Wassermann, capable of spotting aircraft at a distance of up to 400 km, as well as two Freya radars and two giant Würzburgs.

A big command bunker collected all the information and was able to detect the enemy and follow its own planes.

The entire station was heavily protected by anti-aircraft guns mounted on bunkers (L409A and L410A) as well as by many bunkers equipped with machine guns and anti-tank guns. In addition, there were trenches, barbed wire barriers and mine fields.

In the weeks leading up to the Allies landing in Normandy on  6 June 1944 (D-Day), the radar station was bombed several times. However, it was a bomb attack in the afternoon of D-Day itself that destroyed the 65 meter high Wassermann radar.

In the following days, the radar station was attacked several times by Canadian and British troops, but the Germans only surrendered on 17 June after the attackers used tanks.

After the war, the area was cleared of mines and equipment, and in 1992 it opened as a museum. 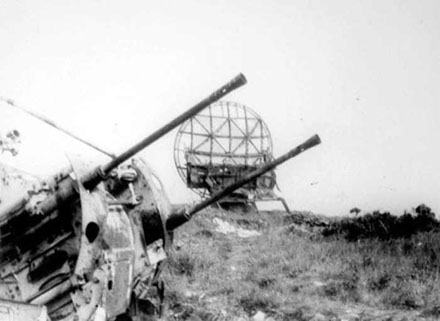