In 1915, the Italians built a gun battery to protect the seaward entrances to Venice. An armored turret, mounted on a large bunker, held two 381 mm. guns. In the area around the bunker were barracks, ammunition depots and other necessary installations.

At the beginning of World War II, the battery which by now named “Amalfi,” was fully operational. In order to reinforce the air defenses, the Italians installed an antiaircraft battery one kilometer to the south. This battery was equipped with four 76 mm. antiaircraft guns.

The Germans took over the air defense battery in 1944, and expanded it, adding new bunkers. The guns were changed out, with six 100 mm. Italian guns. Each gun was emplaced in its own bunker with room for the crew and ammunition.

Several bunkers were built north and south of the battery for the crew and close-in defense. Another FL277 bunker was built for a searchlight mount.

In April 1945, the Germans retreated, abandoning the area. 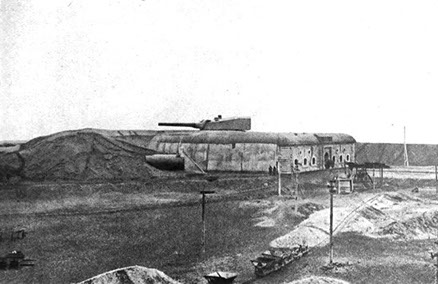