Following the Allies landing in Sicily in September 1943, the Germans began to construct a large number of east-west defensive lines across Italy's mainland. These nearly 40 lines used natural obstacles such as rivers and mountains and each was named. The German strategy was to defend a line and then retreat to the next and so on. Most of the lines were only weakly fortified, but it nevertheless took the Allies almost two years to cross the last defence line and reach the Alps.

One of these was called ”Reno", running from Bologna to Comacchio. In the winter of 1943, Organitization Todt began to expand the Reno line and one of the Strongholds was at Pineta del Fondo, which was a small wooded area on the main road just south of Mesola.

In all, there were nine bunkers in the small forest, including crew bunkers (R668), a gun bunker (R677), several machine gun bunkers and small bunkers with mounted turrets from tanks.

The bunkers of Pineta del Fondo were finished in the spring of 1944 but by now, the military situation had changed and they were therefore never fully armed.

After the war and until the 1990s the bunkers were used by homeless people. Then they were locked until being opened as a museum in 2014. 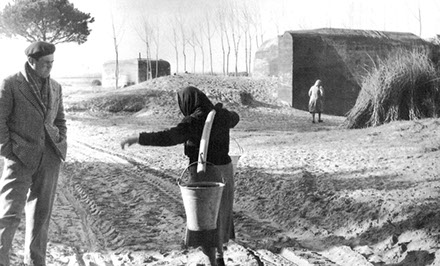