On the very outskirts of Neville-sur-Mer, the German navy started in 1943 to build a gun battery, using 3 British 94 mm. anti-aircraft guns (Vickers M/39) which had been captured when the Germans occupied the Channel Islands in 1940. These guns had a range of 12 km.

The battery, which was built to help to protect the port of Cherbourg, was placed in the front row of dunes, so most of the bunkers are today on the actual beach.

The gun batteries built by the German navy were generally located close to the coast. The Kriegsmarine wanted to protect against enemy warships, whereas   gun batteries built by the German army were virtually all located inland from the coast. The army had more experience with land engagements and their guns were not suitable for moving sea targets.

On the morning of 18th June 1944, the battery was the target for a heavy bombardment from U.S. naval vessels and, with its relatively short range, could not return their fire. The position was evacuated, with a few bunkers blown up,  and the crew retreated back to Cherbourg.

On 20th June, U.S. ground forces reached the battery, on their way to Cherbourg. 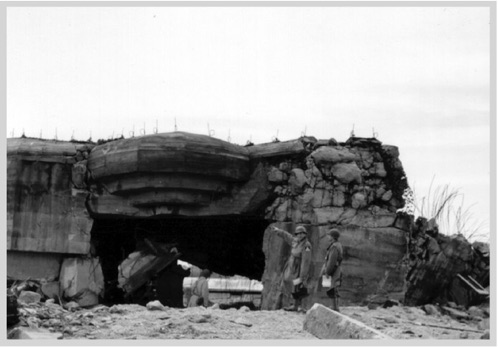