Overlooking the lighthouse of La Corbiere, in the southwest corner of Jersey, the Germans in 1943 built an observation bunker called "Marine Peilstand und Meßstellung 2".

This bunker was intended to have been part of a network comprising a total of nine such bunkers, placed around the entire island to observe hostile ships. Using observations from just two of these bunkers, direction and range could be accurately and quickly calculated and this information passed to the various gun batteries on the island.

However, out of the nine planned bunkers, only MP1, MP2 and MP3 were built.

The bunker was almost 18 metres high and had walls 2 metres thick. Observation and targeting took place on five floors through the openings in the front of the bunker.

The bunker was painted with camouflage, so that it looked like one of the characteristic round granite towers, for which Jersey is well known.

In 1976, the bunker was used for coastal surveillance and a glass observation room was built on the top. In 2004, the surveillance function was moved and in 2007 the bunker was converted to a holiday apartment with three-storey bedrooms, kitchen and living room at the top.

It is now possible to rent the bunker through Jersey Heritage. 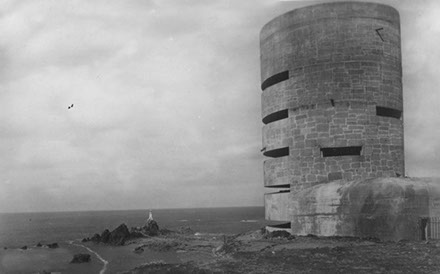