In 1943, in the northwestern corner of the Channel Island of Jersey, the German Navy built a Battery Observation Post called "Marine Peilstand und Meßstellung 3".

Bunker MP3 was intended to be part of a network comprising nine bunkers. These were to be placed around the entire island to observe hostile ships. Using readings from just two of these Observation Posts,  bearing and range could be accurately and quickly calculated and then passed to the various gun batteries on the island.

Of the nine planned bunkers, only MP1, MP2 and MP3 were built.

MP3 had 2 metre thick walls, 7 floors and the target identification was made through openings in the front of the bunker. For help in bad weather or at night, a Seetakt radar was mounted on the top.

Bunker MP3 can be visited on guided tours organized by the Channel Islands Occupation Society. CIOS. 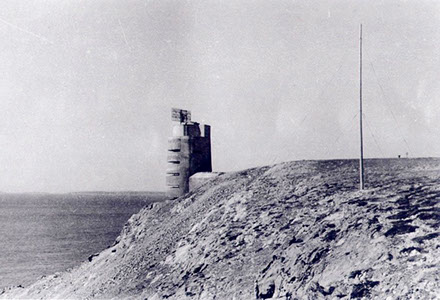