Lorient was occupied by the Germans in June 1940.  As early as July, the first German U-boat arrived and for the rest of the war the port of Lorient remained the most active and largest German U-boat base.

In November 1940 Admiral Karl Dönitz moved his headquarters to a villa overlooking the harbour, but after the British commando raid at Saint Nazaire in 1942, he moved, for security reasons, back to Paris.

The first Allied air raid on Lorient occurred in September 1940 and shortly after the Germans began construction of bunkers to protect their U-boats, two so-called “dom” bunkers. These were cast in reinforced concrete, each was 80 meter long and 16 meter wide and had a maximum thickness of concrete of 1.5 meter.  Each “dom” could contain one U-boat.  The U-boats were towed out of the water on a trolley and brought into the bunkers.

However, this quickly proved not to be efficient enough and in February 1941 the German Navy began construction of a U-boat bunker with five U-boat pens called Keroman I.  It came to measure 400 x 145 meter and was completed six months later just south of the two dom bunkers.

Almost simultaneously the Germans built a bunker, a little further up the river. This bunker measured 145 x 50 meter and had two U-boat pens. The bunker was called Scorff bunker and was operational in August 1941.

Keroman was the name of the entire base and subsequent bunkers that were built were Keroman II, which began in May, with seven pens; and Keroman III in October of that year also with 7 pens.

Keroman I and II were dry docks, where the U-boats were towed ashore as by the dom bunkers while Scorff and Keroman III had direct access from the sea.

Keroman III, which was the biggest of them all, was in 1944 equipped with double roof, where the lower roof consisted of 3,5 meter of reinforced concrete and the upper with beams of similar thickness. These had a distance of 1 metre between them. This style of construction was designed so that armour-piercing bombs would explode in the space between the two roofs rather than penetrating into the main bunker below.

In the summer of 1943 the Germans began casting concrete of Keroman IV.  That bunker would be used specifically for their latest U-boat, the Type XXI, but the massive Allied bombing delayed construction and the bunker was never completed. Today, only a portion of the exterior walls are left, just northeast of Keroman II.

Northwest of the U-boat bunkers a munitions depot was built, with six ammunition bunkers for torpedoes, these were however all removed after the war.

Lorient was bombed many times by the Allies, with over 30 powerful bombing raids. Nearly 95% of the city's houses were hit but no U-boat was ever damaged, though the raids and damage did hinder the supply of  fresh water, supplies and other necessities.

After the invasion of Normandy in June 1944, the Allies succeeded in surrounding all of Lorient, and its almost 15.000 German marines.  But it was a strongpoint (“Festung”) and was never captured; the defenders finally surrendered to American troops on 10th May 1945, two days after the end of the war in Europe. 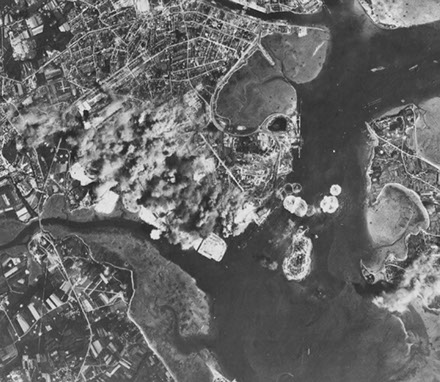