Gun Battery Moltke located at Noirmont Point on the Channel Island of Jersey and was built by the German army in 1942.

The armament consisted of four 155 mm. French Guns from 1917 which had a range of about 20 km. They were placed in open concrete posts and were able to defend St. Ouen Bay. They were also able to engage targets on the rest of the island.

North of the gun positions, at Les Landes, the Germans started building a control bunker in 1943, designated MP3 (Marine Peilstand und Meßstellung 3).  This was part of a network of bunkers around the island. By using the radar in two or more of these bunkers, the location of enemy ships could be triangulated, which allowed the gunners to more accurately direct their fire. Nine of these bunkers were scheduled to be built, but only three were completed by the end of the war.

In August 1944, the alarm went off in the gun battery when the British destroyer HMS Onslaught, in process of attacking a German convoy, came within range of the battery. Along with 3 other gun batteries,  the Germans opened fire and HMS Onslaught withdrew.

After the war, the British dismantled the guns and threw them out over the cliffs. They have since been restored and are on display today. One of the guns is on display at Gun Battery Dollmann in Guernsey. 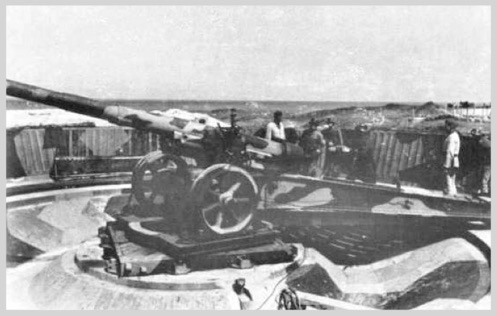