This gun battery was started by the German army in late 1943 and consisted of a Fire Control Post (R636) and four French 105 mm. guns located in each bunker (R671). Construction was completed in May 1944, when Field Marshal Rommel visited during his inspection tour along the so-called south wall. From the beginning of 1943, the Germans worked to fortify the 860 km coastline between the Spanish border and the Italian border.
The gun battery at Estaque was built to protect the port of Marseilles and the main road to the north. Forty houses at the bottom of Boulevard Fenouil had to be evacuated to make room for the piles.
On 14 August 1944, the Allies landed on beaches south-east of Marseille. They advanced rapidly and on 28 August 28 Germans in Marseille surrendered to French forces.
After the war, the French Navy took over the battery and only the southernmost bunker was removed when a roundabout was constructed.
The remaining bunkers are nowadays scattered amongst the villas. 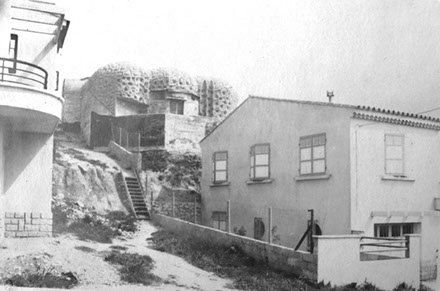