The Daimler Benz AG aircraft engine factory in Genshagen, Berlin was subjected to an Allied bombing raid at the beginning of March 1944. The factory was badly damaged and already a few days after it was decided to move it. A mine near Obrigheim (Baden) was found to have the ideal conditions and in mid-March 1944, the first 500 slave laborers from Dachau were transferred to the site to begin expanding the mine and building the new factory facilities.

All the plants that were set up in existing mines were code names for fish, and the plant at Obrigheim was codenamed Goldfish.

The relocation of the factory machines and about 5.000 workers and technicians took place in early May 1944. The factory primarily made engines for the ME 109 fighter plane, and was scheduled to be one of the largest underground factories in Germany. During the summer the expansion continued and the production machines were made ready. The first engines began to leave the factory in October 1944.

The plan was to produce 500 new engines per month, and to rebuild and modernize another 350. Supply problems and the military situation stopped production in March 1945, when the 330 meter long railway bridge over the Neckar river was blown away. Subsequently, the factory was evacuated.

When the Americans arrived at the scene at the beginning of April 1945, they found an empty factory.

After the war Baden-Württemberg became part of the American occupation zone. Induced by the Americans, most of the machinery was moved to the Soviet Union as war reparations.

In 1971, the last remnants of the railway bridge were removed and in 1999 a memorial exhibition opened to commemorate the 250 slave workers who had died there. 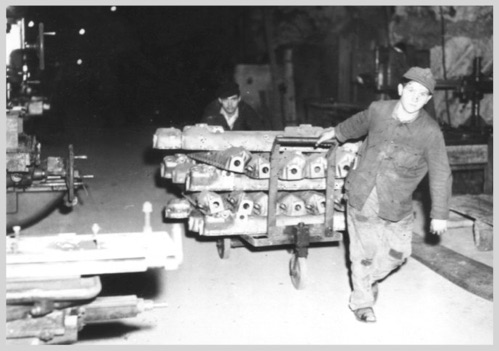