Behind the coastline, to the west of Cherbourg, in 1943 the Germans started to build a gun battery. The four 105 mm. guns were to protect the western flank against attacks on the port of Cherbourg. The guns were Czech Skoda guns dating from 1916 and had a range of 10 km.

Pouring concrete for the bunkers protecting the guns proceeded rapidly but this work was never completed before the Allied landing in Normandy in June 1944.  Today, there are only two gun bunkers (R669) and an ammunition bunker left in Ozouville.

Gun batteries built by the German army were, as a rule, always located at some distance from the coast, as here by Ozouville, since the army wanted to attack the enemy forces on land.  On the other hand, gun batteries built by the German navy (Kriegsmarine) were almost all located quite close to the coast. The Navy had more experience with attacking enemy forces at sea and their guns were more suited to moving maritime targets. The gun bunkers in Ozouville enabled the guns to be moved forward from their casemates, thereby widening the otherwise limited arc of coverage.

The Gun battery today is located on private land. 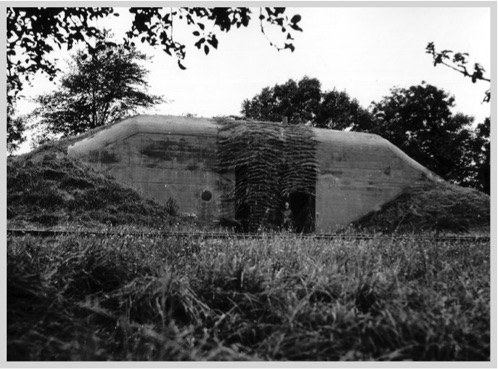