Construction of the "Fliegerhorst Tirstrup" began in early 1944. The runway, taxiways and hangars were built quickly. In addition, concrete pillboxes were constructed for communication (L484), command (R608), sanitation (R639) and crew (R622).

In addition, the surrounding farms were seized and used for the provision of troops and material.

The air base was also prepared for defense with machine gun bunkers, trenches and anti-aircraft guns.

The airfield’s first use was as a night fighter base as well as a home base for the experimental “Mistel” bombers. The “Mistel” consisted of a fighter plane attached to an unmanned bomber aircraft, which was packed with explosives. The pilot in the fighter would fly the planes to the target, and release the bomber above the target.

Towards the end of the war, the German airfields in Denmark were filled with airplanes and the 2th April 1945, over 700 bombers from England were enroute to attack multiple German airbases in Denmark. Due to poor visibility of the target areas the operation was cancelled and the aircraft returned to their bases.

In the mid-1950s, the airfield was refurbished as a NATO airbase, which continued until 1998 when the military part of the airfield closed down. Today, only civilian aircraft operate from this airstrip. 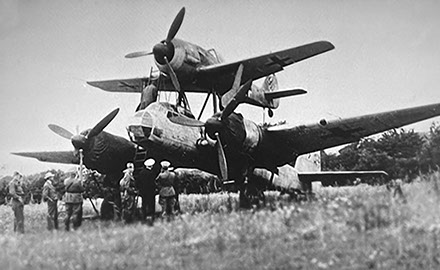