In 1943, in the woods south-east of the Wallon-Cappel, the Germans built a launching base for their V1 pilotless aircraft, one of a myriad of such bases along the northern French coast. The machines  were delivered by rail from production plants in Germany, and then assembled, prepared and launched from a concrete ramp against London.
The V1s s could not be controlled in flight, thus the ramp was pointed directly at London. In Britain, they were called “doodlebugs” and “buzz-bombs” because of the very distinctive sounds from their pulse-jet engines. The official Allied code name was “Diver”.
The distance from the ramp to London is also of great importance because the V1 hit the ground when it ran out of fuel. The system was simple but not very accurate, with very many falling short of their intended targets (mainly London but also south coast ports supporting the Normandy invasion, such as Portsmouth and Southampton). British intelligence also played a part, reporting via “double-agents” that the V1s were over-shooting their targets. The Germans reacted by reducing their range, causing the V1s to all even further short of London – good for Londoners but less so for Kent, where they fell!
The simple design and small size of the base was a conscious choice by the Germans. The bases were quick to build, usually in wooded areas, and did not require large resources. When initially detected by Allied aerial reconnaissance, their function was unknown and they were called “ski sites” because of the curiously curved tips to the storage buildings. Later, they were designated “no ball” sites.

The Allies mounted massive efforts to control the extreme menace from these V1s and all known “no ball” sites were heavily bombed. So the Germans moved to using mobile launch facilities, leaving the fixed sites, such as this one, as decoys to continue to attract the Allied air forces.

The threat from V1 sites in northern France was only ended when the area was captured by Canadian and British troops late in 1944. 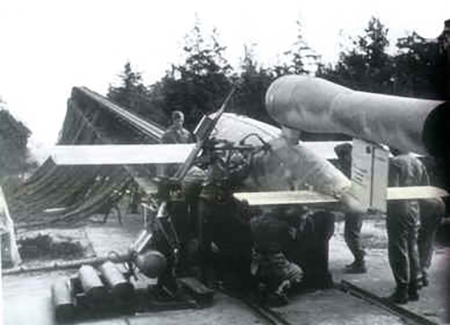 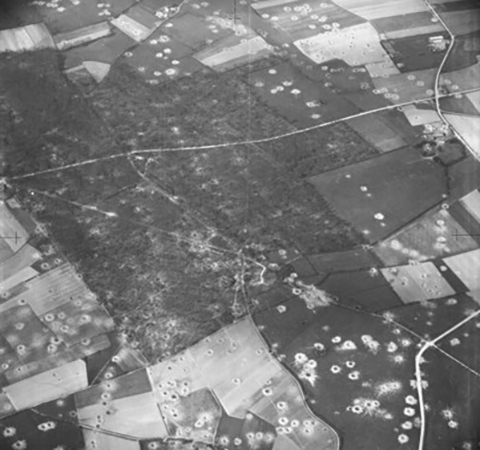