There were two pairs of Flaktowers built in Hamburg during World War II. One was built by Heiligengeistfeld in the north, the other pair to the south by Wilhelmsburg. The northern pair was a first generation pattern, similar to those built in Berlin. The southern pair was a second generation pattern, as in Vienna. Each gun tower (G-Tower) was paired with a fire-control tower (L-Tower) which did all fire-control and range-finding. Both of the L-Towers in Hamburg were destroyed after the war. During the war these towers served actively in defense of the city, and passively by sheltering civilians and art treasures from the city’s museums. A number of shelters and other bunkers were also built around the city to protect the city’s inhabitants.

Hamburg’s proximity to the North Sea along with the concentration of heavy industry and the fleet, made the city a favorite target for Allied bombing raids. During Operation Gomorrha, (Jul-Aug 1943), between 40-50,000 people were killed and roughly a third of the city’s housing was destroyed. During one attack, on 27 July 1943, 787 bombers attacked, causing what became known as a firestorm. This phenomenon occurred when the heat of the fire was so intense that it actually sucked in oxygen from the surrounding area. This caused wind forces up to 240 km/hr to follow. The actual temperatures were so high that asphalt was literally burning in the streets. Between the actual fire, and the fact that oxygen was being sucked out of the shelters and basements, up to 34,000 people died that night alone. By the end of the war, the Allies had conducted over 200 air raids on Hamburg. During these raids, the Allies lost 440 bombers over Hamburg.

Hamburg is currently characterized by its history and there are a large number of monuments to victims of the bombings throughout the city.

Between 1940-42, a U-Boat bunker was constructed in the western part of Hamburg’s port. This bunker contained five U-Boat pens. The bunker measured 139 x 153 meters overall, and had room for 15 U-boats. This made Fink II, as the installation was called, the largest U-Boat bunker in Germany.

On 4 April 1945, the bunker suffered its first Allied bombing raid, but it was not hit. Five days later, there was another attack. This time, two ”Grand Slam” bombs, and fifteen “Tallboy” bombs were dropped on the bunker. This made several of the walls shake and quiver, but there was only slight damage to the U-Boats inside the bunker.

Construction began in December 1940 on the U-Boat bunker that became known as Elbe II. When it was finished a year later, it measured 112 x 22 meters and held two U-Boat pens. This bunker eventually functioned as a yard and garage, where boats built by the nearby Blohm & Voss shipyard were finished by workers in two shifts.

The last boats to arrive in the bunker were three type XXI boats (U-2505, D 3004 and D 3506) which came in Spring 1945. In the middle of April 1945, their crews were sent to the front, which was at nearby Lüneburg Heide. As the bunker was seriously damaged in an air raid at that time, it was decided to scuttle the remaining boats before the war ended.

In November 1945, the facility was blown up by the English. This caused the middle wall and the roof to collapse on the remaining three U-Boats. After the war the bunker was blown into the air and then covered up.

Subsequently, there have been repeated attempts to raise the U-Boats. Their expensive batteries were removed in 1949. U-2505 was pulled out in the 50s and scrapped and the two others were partially broken up.

In 1995, the bunker and what was left of the U-Boats was all covered over and a car park was built over the facility. In 2007, when the runway for the Airbus factory was expanded, the remains of the bunker were uncovered. The remains of Elbe II are visible today in Hamburg’s port. 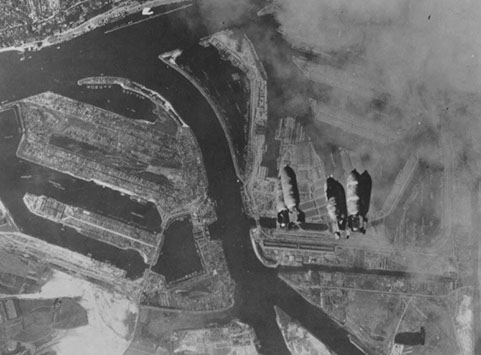 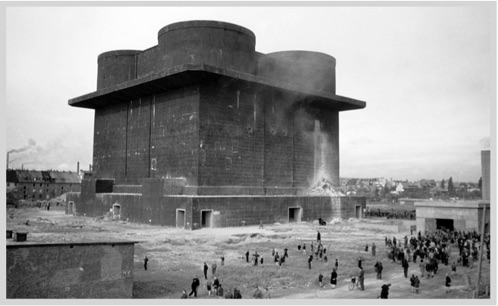 “  Gefechtsturm IV (Hamburg) had gas-attack-protection chambers on the first and second floors (above the ground floor). ”