In the early years of the war Vienna was beyond the range of Allied bombers. Nevertheless, starting in 1942, 3 sets of flaktowers were built on Hitler's personal orders. These were to protect the city's historic treasures.

After the Allied invasion of Italy they established air bases there: Vienna was now within range of the bombers and therefore became subject to Allied air attacks.

The first raid on the city was on 17th March 1944 and by the end of the war, over a fifth of the city had been destroyed.

As in Berlin, the flaktowers in Vienna participated actively in defending the city by firing on the attacking Red Army ground troops.

It slowed the advance down, but Vienna was finally captured by the Red Army in April 1945.

After the war the Soviets made an unsuccessful attempt to blow up the flak towers in Augarten, but when this failed, the idea was dropped and all the towers stand to this day.

“  augarten tower was not damaged by an attempt to demolish it but by playing children that set off stored ammunition in late 1946.  ” 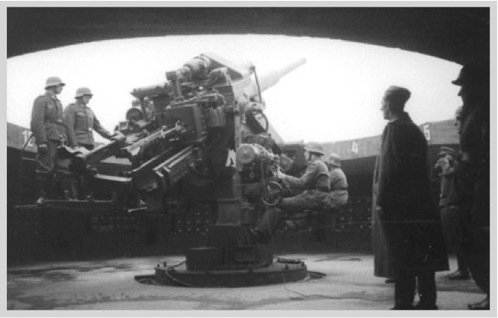 Both towers  in Arenberg Park