As early as April 12, 1940, the German navy fielded Czech 105 mm. guns east of Hornbæk to secure navigation through Øresund. The securing was part of Operation Weserübung, the German conquest of Denmark and Norway which started with the attack on 9 April.

In the middle of May, an actual expansion of the gun battery began and the guns were replaced with 120 mm. cannons that the Germans had captured from Denmark. The range of the guns was 9.4 km. and they could therefore easily cover the entire entry through the Øresund to the Baltic Sea.

Foundations were cast for the guns and a command bunker to direct the fire from the guns. Barracks were built for the crew and the area was fenced with barbed wire and mined.

After the war, the gun battery was taken over by the Danish navy and remained operational until 1958.

Today, the remains of the old gun battery are visible with the foundations for the guns lying exposed on the beach and in the area behind. The command bunker is buried and the entire area is protected. 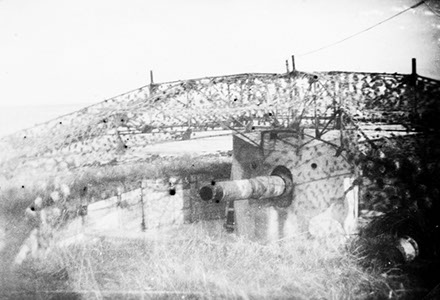