In 1942, in the south-western corner of the Channel island of Guernsey, the German Navy built in an observation bunker called "Marine Peilstand und Meßstellung 3",which was intended to be part of a network comprising a total of six bunkers around Guernsey.

Its purpose was observation and gunnery control and the bunker had five floors, one floor for each associated gun battery. Enemy ships could be very quickly and precisely determined by observations from two of the bunkers, giving both direction and range and this plot could then be passed on to the guns in the various gun batteries on the island.

In practice, however, it turned out to be very difficult for two towers to distinguish the individual ships from each other, if several ships were being observed simultaneously. The construction of the bunkers was therefore stopped before all six had been were completed.

The bunker is 1 km. northwest of the Gun Battery Dollmann and MP4 and today houses a museum. 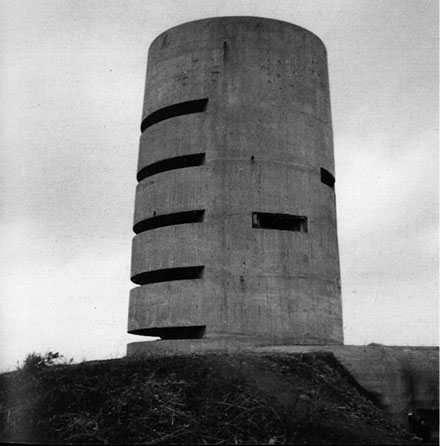