Guernsey has the most strategic location of all the Channel Islands and the powerful guns that the Germans installed there could protect most of St. Malo Bay.

In order to obtain maximum benefit from the guns, the German Navy planned to set up six Battery Observation Posts around the entire island. This network was intended to observe enemy ships and by using sightings from just two, bearings and range could be accurately and quickly calculated. This information could then be passed to the guns in the various batteries on the island.

In practice, however, it proved very difficult to observe several ships at one time and construction was therefore stopped before all six bunkers were built.

South-east of Gun Battery Dollmann, is Marine Peilstand und Meßstellung 4 (MP4); the bunker was built in 1942 and has walls 2 metres thick and 5 floors. Observations and targeting were made through the openings in the front of the bunker. 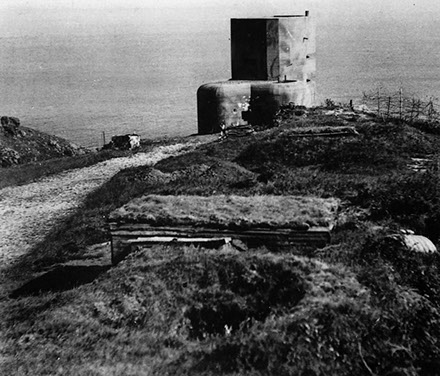