In 1942, on the north-western corner of the Channel Island of Guernsey, the German Navy built a bunker they called "Marine Peilstand und Meßstellung 2", which was intended to form one of a chain of six such bunkers around the island.

The purpose of the network was to observe enemy ships and by using observations and bearings from just two of the bunkers, direction and distance could be accurately and quickly calculated. This information could then be passed to the various gun batteries on the island. In practice, however, it proved very difficult to observe several ships at once so construction was therefore stopped before all six bunkers were completed.

The MP2 bunker was built to look like a Martello tower, a fortification built in the 19th century on Guernsey, around much of the coast of Britain and even elsewhere in the British Empire, their purpose being to defend against attacks by Napoleon's army. Observations were made thought the openings in the front of the bunker and took place on four floors.

The bunker is located in a small strongpoint with several other near-by bunkers and has a great view to the island of Lihou. One kilometre to the south-east lie the remains of the Gun battery Mirus, equipped with the most powerful guns on the entire island. 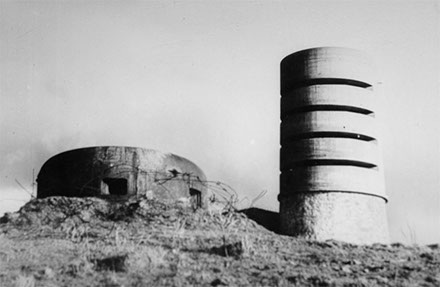