After political pressure, Lithuania was incorporated into the German empire by the end of March 1939 and the German Navy quickly decided that the coast should be fortified. This would be achieved with two coastal gun batteries and six combined coast and anti-aircraft (“flak”) batteries which would all be operational in 1942.

The first coastal battery, Gun Battery Brommy or Memel-North, as it was also called, consisted of two bunkers each with two combined gun positions. These had open concrete wells to the gun at each end and crew and ammunition bunkers in the centre. Between the two dual gun positions, the command bunker was built, with a range finder and other targeting equipment. The guns were 150 mm. and had a range of 16 km.

These guns were replaced at the beginning of 1942 with four 128 mm. flak guns, which could also target ships up to a range of 21 km. The gun battery changed its name to Naval AA-Battery Försterei.  The 150 mm. guns were sent to Norway, together with the crew, where they were used on the island of Arnøy.

It was planned from the outset that there should have been two identical gun batteries, but the southern Memel-South was never built.

The Försterei Battery was taken over by the Russian army after the war. The bunker is located on the beach today and there is a museum is on site. 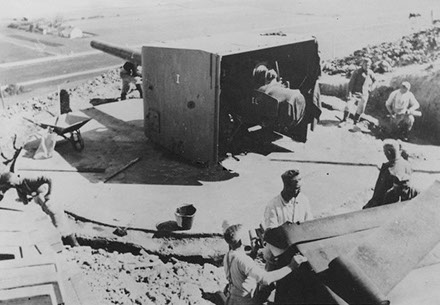