By early 1944, the Allies had achieved air superiority over Germany and the bombing of the large German industrial cities occurred almost daily. In an effort to ensure that production could continue, part of the German war industry was evacuated to existing or new mines in southern Germany and Austria.

In the city of Halbertstadt, between Hanover and Leipzig, in the spring of 1944, the Germans commenced a large underground factory. The plan was to excavate 13 kilometres of galleries, with about 40-60.000 square meter of production area. Upon completion, it was intended that the company Junkers Motorenwerke Dessau would use 6.000 workers to manufacture aircraft parts. All the factories the Germans created in new mines were allocated code names for geological formations and the plant near Halbertstadt was codenamed Malachit (Malachite).

To build the factory, the Germans used slave labourers who were held in a newly built concentration camp at Langenstein-Zweiberge near the construction site.  This was a sub-camp of the Buchenwald concentration camp.

Simultaneously with this factory, the Germans began the further development of an existing mine a few hundred meter away and this site was intended for a Krupp armament factory to manufacture gun barrels; this was was codenamed Maifisch (Allis shad). Due to a change in priorities, the construction of this latter plant was stopped in November 1944 and was never resumed.

In early April 1945 construction stopped. Around 1.600 prisoners were sent on death marches away from the approaching Red Army and 1.400, who were too weak to march , were abandoned in the camp. On 11 April, about 1.000 surviving prisoners were liberated by the U.S. Army. It is estimated that a total of 1.900 prisoners were killed during these construction works.

Malachite was in the Soviet occupation zone and after the transfer from the Americans, the Soviets started to dismantle all the industrial technical equipment. The plan was to blow up the factory by sections  but that was never implemented.

In 1976 the National People's Army (NVA) decided to utilise the site for secure storage and 40.000 square meter were modernized, finally opening in 1984 under the code name Komplexlager 12.

After the reunification of Germany in 1989, the storage was used to safeguard old East German banknotes (Ostmark) before they were destroyed and in 1995 the plant was sold to a private owner. 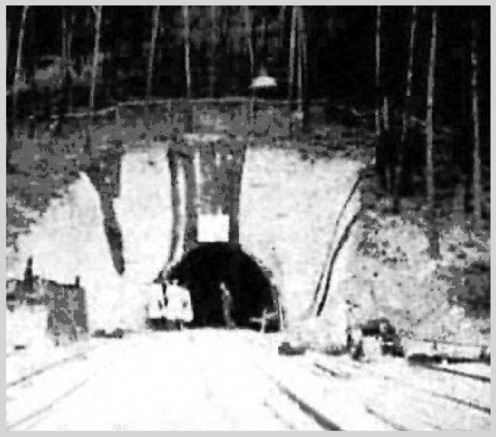