Allied intelligence reported that the battery contained six 155 mm. guns, captured from the French. They covered the two beaches which would go down in history as ‘Omaha’ and ‘Utah’. So, in April 1944, the decision was made to bomb the site. The guns were then moved a mile inland.

Air reconnaissance photos recorded the after effects of the bombing, which had not affected the battery’s casemates in any serious way. Allied Supreme HQ knew that the guns had been moved but still felt the casemates were a threat, as they could house artillery forward observers. Consequently, the decision was made to make a ground assault on the battery.

With its cliff-top position, the only way to take the battery was from the beach. This task fell to 225 men of US 2nd Ranger Battalion. After some initial manoeuvre amongst commanders, the task force was led by Col James E Rudder, and ‘Rudder’s Rangers’ were born. They would make their climb to the cliff-top before the main landing. They were not told of the guns being moved.

The whole operation began early in the morning of 6 June, and a naval bombardment kept down the heads of the German garrison. After some navigation problems, the Rangers arrived at the beach below the cliffs and began the long climb, using ladders and ropes. They sustained a few casualties, but the majority made it to the top, and found the guns gone. A patrol discovered their new site and they were destroyed.

Over the next two days, the Rangers were subjected to heavy attacks, which they bravely held off. Reinforcements finally arrived to relieve the remaining 90 men.

Today, Pointe du Hoc is easily visited and remains much as it did on that fateful day. 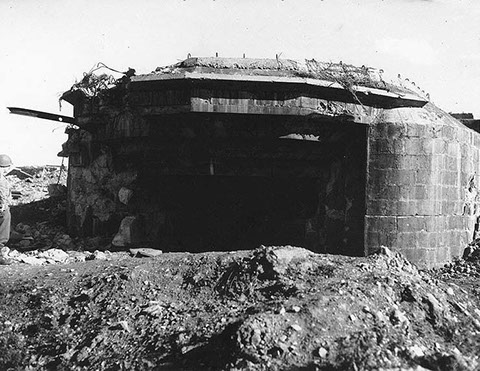 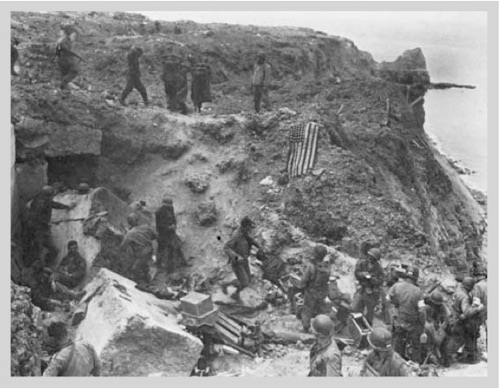 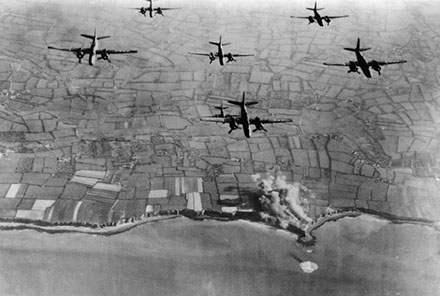 “  Many don't know about the 2 paratroops of I-506th PIR, 101st Airborne that were already there, Leonard Goodgal and Raymond Crouch. These were 2 of 4 men that were able to parachute from a C-47 that had been hit and was on fire. Unfortunately, the rest of the troopers and air crew went down in the channel and are still there. Leonard placed the U.S. flag so the ships would stop firing at them. Rudder gave him paperwork recommending he receive a Silver Star. But when he returned to the 101st, his Lt didn't believe how he and Crouch were with the Pt du Hoc Rangers and ripped up the paper. Leonard saved the Eisenhower letter he got prior to departure and still has it. On the Back he went around to many of the rangers and had them sign their names and where they were from, unit, etc.. I saw the letter. I also had met a lady in the town of Trevieres that saw the a/c on fire and the chutes deploy that night. ”

“  A friend of my father was accidentally on the Pointe du Hoc attack. The driver of his landing craft misjudged the current and instead of landing his forces a mile up the beach he dropped the ramp at Point du Hoc. Those troops were forced to go up the cliffs with the Rangers who had trained for this invasion. This hero died just this year. When he talked about his D-Day experience on the first wave he always shed tears. But he did say the guys from his landing craft always kidded the Rangers about how the Rangers had trained so hard to invade Pointe du Hoc but their guys went right up with them. ”

“ Visited this site in May, 2012 and it remains pretty much as it was in June, 1944. You are taken back in history standing next to a German gun bunker and looking out across the Channel. Hard to imagine the carnige that took place on that date. The site around it is covered with deep shell holes and destroyed bunkers. Some remain intact.   ”