This battery was built by the German Army in 1943, near the village of Mont Conquerel. The guns were captured French 105 mm. guns, with a range of 12 kilometers. Each of the guns was mounted in a R671 bunker. The bunkers were camouflaged as houses in order to hide them from the Allies, but the battery’s location was known.

During the Allied landings in Normandy June 6 1944, the battery was taken under fire by the American heavy cruiser USS Tuscaloosa.

The guns were mounted so as to fire to the northeast, and were thus bound by the bunker construction. They therefore did not constitute a threat to the Utah Beach landings 14 kilometers to the southeast. On 14 June 1944, the battery was attacked and captured by US troops. 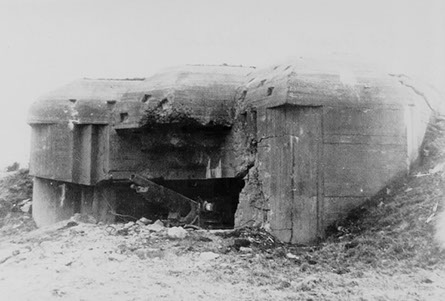