Liepāja or Libau, as it was called in German, has always been an important port city and at the end of the 1800s, the Czar of Russia, ordered the construction of fortifications.

After the German occupation of 29 June 1941, these facilities were strengthened. As the war progressed, by 1943 the fortifications were further greatly enhanced. Among other additions, an anti-tank trench around the city was expanded and reinforced with bunkers for machine gun (R58c).

In 1944, Libau and the remainder of the peninsula was enclosed in the so-called Courland Pocket and, from October 1944, all supplies to the trapped Army Group Nord  were shipped via Libau and the other port further north, the city of Windau (Ventspils). The Courland Pocket was besieged until the end of the war in May 1945 and during this period, the 500,000 soldiers were mainly provided through the two ports. Supplies came in and wounded soldiers and civilians could be evacuated by sea.

The Anti-tank trench and the many bunkers still exist today, just east and north-east of the city. 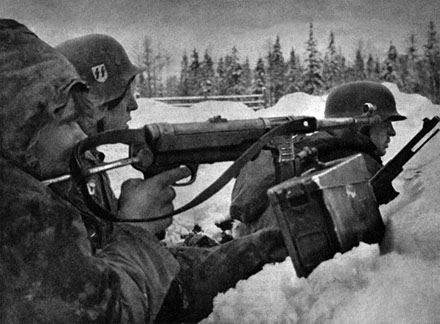