In 1941, shortly before the German attack on Russia (“Barbarossa”), they began construction of a field headquarters for their notorious SS. The headquarters was named Hochwald, but also got the nickname Schwarzschanze because of the SS soldiers black parade uniforms. The headquarters was located near the town Grossgarten (today the Polish city Pozezdrze) near the imminent front against Russia and only about 20 km. east of Hitler's headquarters, Wolfs Lair.

A number of big bunkers were constructed and the area was of course heavily protected with minefields, barbed wire and foxholes.

The headquarters functioned operationally during the attack on Russia 22th June 1941, but because of the rapid advance, a new headquarters, namely Hegewald, was built some 900 km. farther to the south-east.

Hochwald was abandoned in early 1945 and most buildings and bunkers blown up. The Germans were on the defensive and everything was rapidly moved westward, not to fall into the hands of the advancing Soviets.

Today one can visit the area and the best preserved bunker is the one that was built for Heinrich Himmler. 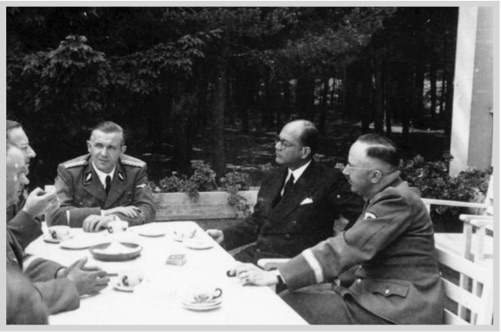