In the early 1930s, Germany had a need for a training center where the Nazi Party could teach the nation’s future leaders and political soldiers. It was decided to build three other schools, all in a majestic style like old medieval castles.  In addition to Krössinsee, the other facilities included Ordensburg Vogelsang in North Rhine Westphalia near Belgium, and Ordensburg Sonthofen in the Allgäu, in southern Bavaria. The fourth school was constructed using the existing medieval castle at Marienburg in East Prussia, which is today in Poland.

Ordensburg Krössinsee was located in the town of Falkenburg, Pomerania, and like the other two was started in 1934. The school would be responsible for the first year training, with students continuing their second year at Vogelsgang. The school was designed by architect Clemens Klotz. It was completed in 1936 and received its first students that year.

At the start of WWII, the priority of the teaching was diminished and the schools primary role changed to training units of the Hitlerjugend for front line service. In 1941, the school’s name was changed to Die Falkenburg am Krössinsee. During the summer of 1944, the school was involved in combat action, with some of the buildings being destroyed.

Today, the school is used as a barracks by the Polish Army. 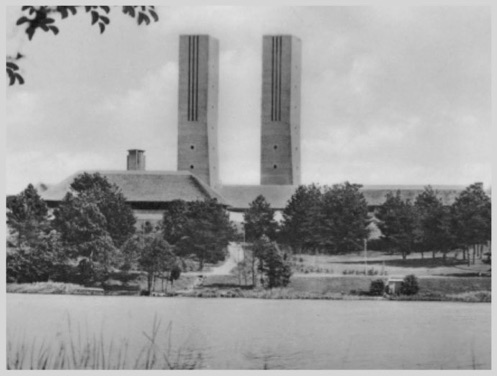