To protect the entrance to Ofoten and Narvik in Norway, the German navy started in 1941 to construct a gun battery of 4 pcs. 305 mm. guns, which the Germans had taken over from a former Norwegian coastal fort at Mågerøy in Oslofjorden. the guns had originally been manufactured by Bofors in Sweden. The battery was strategically placed on the Lødingen peninsula, overlooking Tjeldsundet. Besides the main armament, the battery also had 4 pcs. 88 mm. anti-aircraft guns and a 150 mm. gun for launching illuminating “star shell”.

The construction work was primarily carried out by Russian prisoners of war living in a dedicated barracks camp. The guns were all operating by May 1942.

After the German surrender, the guns were taken over by the Norwegian military who replaced the existing guns with 105 mm. guns. The gun battery was renamed Nes fort and several of the previous buildings were reused and new ones built. In 1992 the guns were replaced with modern 120 mm. Bofors guns with automatic loading. 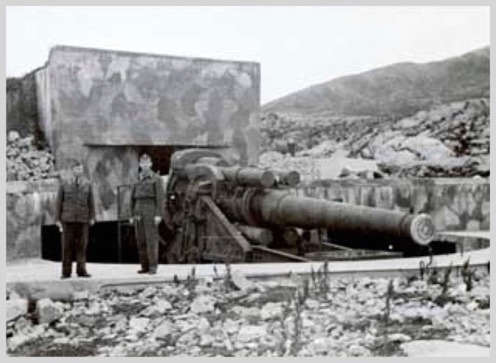