On Ille Cézembre, outside the city of St. Malo in Brittany the German navy started construction of a gun battery in 1942, with six French 194 mm. rail guns. These were placed in open ring positions and therefore had a 360° field of fire. The guns dated from 1870 and in addition, a large command bunker (M157) was built for fire control. The guns had a range 5 km. and for their protection, several anti-aircraft positions, ammunition and crew bunkers were spread around the island.

Cézembre was part of "Festung St. Malo" [Fortress], but after the Americans captured the city itself in August 1944, the island was completely isolated. The garrison comprising nearly 500 German and Italian soldiers refused to surrender and the next week, the island was turned into the most bombed area throughout World War II. Both from the sea and air, the island was bombed beyond recognition. The Germans tried to get supplies in from Jersey and the severely wounded evacuated, but the massive bombing, coupled with the exhausting water supplies, meant surrender was inevitable, taking place on 2 September 1944

Because of the massive bombing in August 1944, large parts of the island are still littered with unexploded shells, bombs, mines and bomb craters.  Most of the island is fenced off and inaccessible. 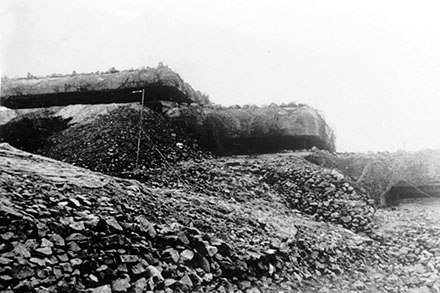