In the late 1800s three textile spinning mills were built in northern Czechoslovakia, in the cities of Rabstejn, Janska and Kamenice. These three mills were in the area incorporated into the German Reich before the war. Early in 1942, it was decided that these old spinning mills would be used to produce weapons and aircraft components.

Weserflugzeugbau Bremen was a company whose factories had recently been bombed by the British. The company wanted to move the facilities out of the range of Allied bombers. During 1943, about 6.000 technicians and workers were in place and production resumed. Soon there were over 6.000 employees, prisoners of war and slave laborers in the process of production.

In early 1944, the Allies achieved air supremacy over Germany and the large industrial cities of Germany were bombed almost daily. In an effort to ensure that production could continue, the most important parts of the German war industry were moved to new or existing mines in southern Germany.

In Janska they found a suitable place and in August 1944 the first group of approximately 700 prisoners was moved from the Flosenburg concentration camp to a newly created camp. During the next six months these slaves excavated almost 20.000 square meters of sandstone and dirt, in order to build new underground production facilities. All the plants that were housed in newly built mines had geological code names, and the plant at Rabstein was codenamed Zechstein.

After the war, the former camps were used to as detention centers and refugees camps for the Sudeten Germans from the surrounding areas. Between 1953 and 94 the underground areas in Rabstein was used as an ammunition dump and Janska as gasoline storage for 8 million liters.

There are currently arranged one exhibition on site and it is possible to visit the old underground passages. 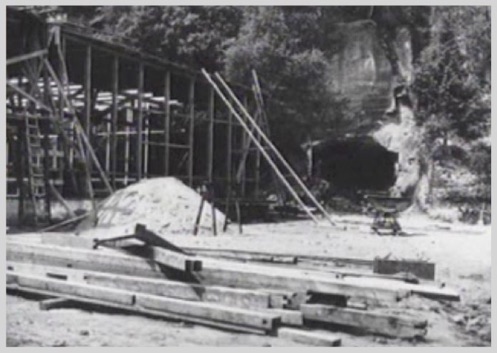