In August 1943, after the Allies had begun to bomb the ball bearings factories at  Schweinfurt, the German armaments industry rapidly decided to move the production towards the East, out of range of Allied bombers.

Near the town of Landeshut (located today in Poland called Karina Góra) there was an old mine and workshops were quickly built for production. Machines and technicians were transferred from Schweinfurt and within one year, both within and outside the mine, 20,000 ball bearings were produced a day. All factories that were placed in old mines were given code names after fish or amphibians and the Landeshut mine was given the code name Bonito (Skipjack tuna).

At the same time, the Germans were developing a long-range reconnaissance aircraft called Arado 234. The aircraft was the first of its kind, being equipped with jet engines, and the development and design department was moved to the Landshutmine at the beginning of 1944. The designers were instructed to modify the aircraft design to add the capability for bombing and night-fighter as well as pure reconnaissance.

Production of ball bearings and development of new aircraft continued until February 1945 when the Red Army was approaching from the east and the whole area was therefore evacuated to the west.

Today there is a museum in the old mine. 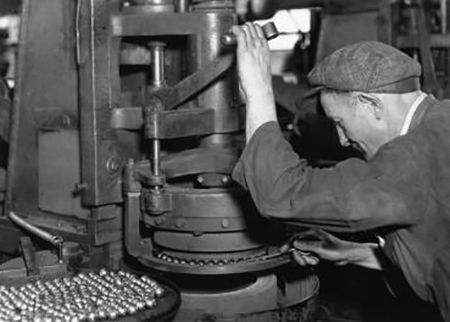