Anlage Süd (Installation South) was one of Adolf Hitler headquarters in Eastern Europe. It was built in 1940-41 in German-occupied Poland. The complex consisted of two garage bunkers (so-called dom bunkers) for the protection of Hitler's personal train. One of these was located at the town of Stepina and the other at Strzyżów.  Each of these bunkers was nearly 400 meters long and made of reinforced concrete 200 cm. thick. In addition, there were dozens of houses, barracks, personnel bunkers, and watchtowers built for operations, administration, and defense.

The headquarters was completed in summer 1941 and Hitler first came there on 27 August for a meeting with Benito Mussolini. Each of these leaders came by train. Hitler’s train was kept in the bunker at Strzyżów and Mussolini's in the Stepina bunker. The actual meeting, which lasted several hours, was held on Hitler’s train, which he never left. The next day, his train was the first to depart.

By the summer of 1944 the front had moved so close to the area that it was abandoned. When the Soviets took it over in August 1944 they transformed the area in to a field hospital.

After the war, the Stepina bunker was used for mushroom production and today there is a museum on the site. 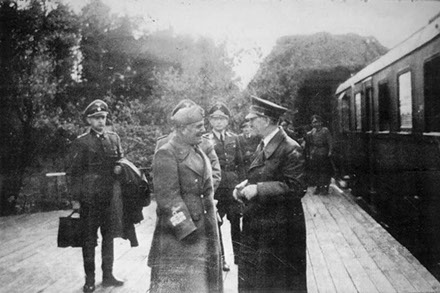