By early 1944, the Allies had achieved air superiority over Germany and the bombing of the large German industrial cities occurred almost daily, the Royal Air Force by night and the United States 8th Air Force by day. In an effort to ensure that production could continue, part of the German war industry was moved to existing or new mines in southern Germany and Austria.

In 1944, outside the Austrian city of Roggendorf, the SS converted an old barracks into a concentration camp for 15.000 prisoners. This camp was named Melk and the prisoners were to be used in 3-shift operations to drill and excavate a factory of 65.000 m², to be used by Steyr-Daimler-Puch AG for the production of ball bearings for the German arms industry.

All the plants housed in newly built mines were given code names based upon geological formations and the plant near Roggendorf was codenamed quarz.

The slave workers, transferred from Mauthausen concentration camp, were pushed to the limit and it is estimated that about 5.000 were killed at work. As a consequence, in November 1944 the SS built a crematorium in the camp to deal with  the high mortality among the prisoners.

Construction of the mine continued until mid-April 1945 when U.S. and Soviet troops were advancing upon the area. The SS guards had planned to force all the workers into the mine, then blow up the entire plant. This plan was not implemented and instead about 7.500 prisoners were sent on a death march back to Mauthausen.  All those prisoners remaining in the camp were murdered.

On 8 May 1945 Soviet troops arrived at the unfinished mine and a completely abandoned concentration camp.

After the tunnels were emptied of their contents, the Soviets attempted, to blow them up. Failing to achieve their objective, the Red Army departed and the tunnels remained open. It was not until 1994 that the entrance was finally covered, but has since repeatedly been dug up. 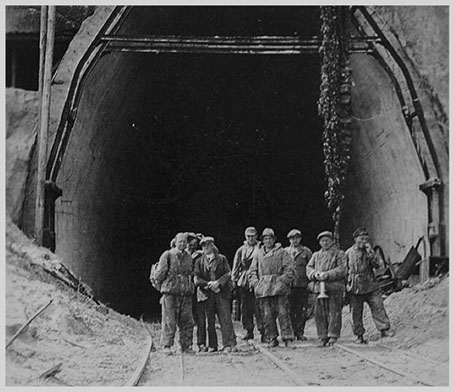