The Výpustek cave in the Czech Republic was first discovered and explored in the 18th century and is one of the few areas in Europe, where complete skeletons of dinosaurs have been excavated.  In 1920 the cave was significantly extended through the mining of phosphate clays and in 1937, the Czech army began to transform the almost 2 km. long cave into an ammunition dump.

During World War II, the area was incorporated into the German Greater Reich.  By 1944, the fortunes of war for the Germans had reversed and the Allies were gaining air superiority over Germany, resulting in the start of an air campaign systematically to bomb the large German industrial cities. In an effort to ensure that production could continue, the most important parts of the German war industry were moved underground and to southern Germany.

The cave in Výpustek was equipped with concrete floor and walls in 1944.  Every day, nearly 1.500 slave labourer and German technicians worked in the underground factory to manufacture aircraft parts for the German company Auslasswerke. The factory was codenamed Dinar and operated until May 1945 when, with the Red Army approaching, the Germans tried to set fire to the machines and blow up the tunnel entrance.

After the war, the Czech army moved in again and used the cave until 2008 as a secondary headquarters. Today it is possible to visit the cave on a guided tour. 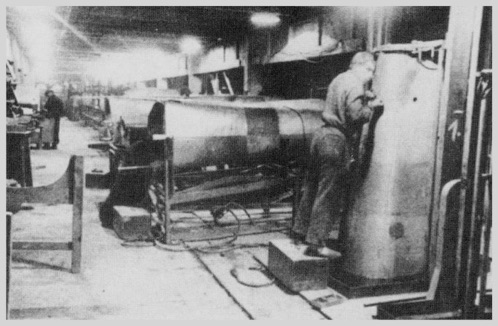