The German navy had already set up four 120 mm guns at the Osterneset on the northern tip of the island Stord in the autumn of 1940. The guns had a range of 10 km. Three years later, in the summer of 1943, the guns were replaced with more modern 127 mm guns with a range of 17 km.

In addition to the guns, three 76 mm and three 20 mm anti-aircraft guns and a light mortar were also installed in the gun battery.

Nowadays, the gun battery is well preserved, but very isolated. 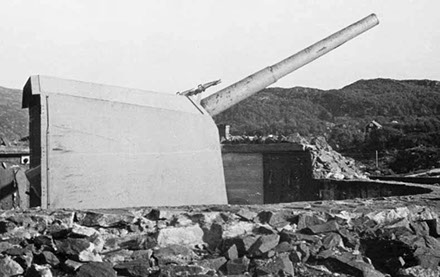