In December 1942, the German navy started the construction of a gun battery at Honigsvaag at Nordkap. The guns were four 170 mm. guns that had been transfered from Pillau by the Baltic Sea. They had a range of 20 km. and for fire control, a large command bunker (M157) was built.

After Finland had signed a ceasefire with Russia in September 1944, the Germans began a massive withdrawal from northern Norway. Operation Nordlicht (northern light) meant that all positions were abandoned: houses, bridges and roads were blown up. Everything that could fall into the hands of the Red Army was removed. 45,000 Norwegians were forcibly evacuated and over 10,000 houses, churches, farms, schools etc were torched. Animals were slaughtered, fishing boats were scuppered and more than 20.000 phone poles were chopped down. In addition, crops were burned and large areas mined.

As part of this withdrawal, the guns and bunkers in battery Nordkapp were blown up in December 1944.

After the German surrender, the civilian population began to return to their houses and in September 1945 the last Russian troops left northern Norway.

The battery today is a maze of abandoned bunkers. 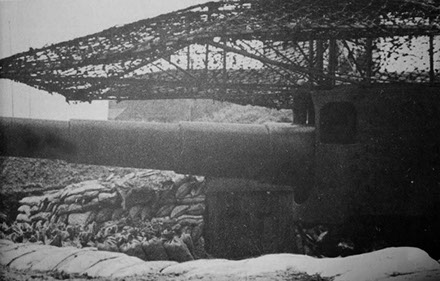